For Beautiful Black Boys Who Believe in a Better World (Hardcover) 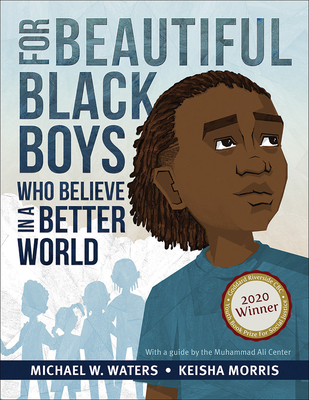 Dad, what happened?
Why are they shooting?
What is this vigil for?

The shootings keep coming, and so do Jeremiah's questions. Dad doesn't have easy answers, but that doesn't mean he won't talk about it--or that he won't act. But what if Jeremiah doesn't want to talk anymore? None of it makes sense, and he's just a kid. Even if he wants to believe in a better world, is there anything he can do about it?

Inspired by real-life events, this honest, intimate look at one family's response to racism and gun violence includes a discussion guide created by the Muhammad Ali Center in Louisville, Kentucky, a multicultural center and museum committed to promoting respect, hope, and understanding.

A portion of the publisher's sales proceeds will be donated to nonprofit organizations that facilitate the empowerment of Black communities.

Michael W. Waters is an award-winning author, activist, professor, and pastor. A sought-after speaker to national and international audiences, he is a frequent social commentator for major media outlets. He was named one of America's emerging leaders by Ebony magazine and has received multiple honors for his work in peace and justice. Michael W. Waters lives in Dallas, Texas.