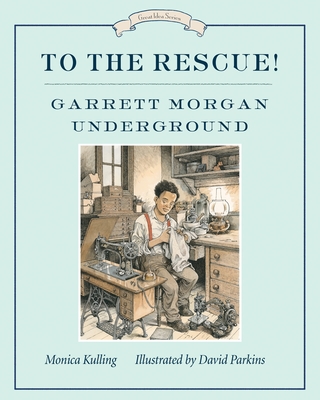 The son of freed slaves, Garrett Morgan was determined to have a better life than laboring in the Kentucky fields with his parents and ten siblings. He began by sweeping floors in a clothing factory in Cleveland, Ohio, where he decided to invent a stronger belt for sewing machines. When he was promoted to sewing-machine repairman, Garrett was on his way. In 1911, 146 workers died in the shocking Triangle Shirtwaist Factory fire in New York City, so Garrett decided to invent a safety hood for firefighters. Little did he know that most people wouldn't be interested in buying his safety hood when they discovered its inventor was black. But an explosion that trapped workers in a tunnel under Lake Erie soon changed all that. Garrett's hoods were rushed to the scene and used to rescue as many men as possible. Developed further, Garrett's invention came to save thousands of soldiers from chlorine gas in the trenches of World War I.

Monica Kulling is a poet who has published over forty books for children, including picture books, adaptations of classic novels, and biographies. Known for introducing biography to children who are just learning to read, she has written about Harriet Tubman, Henry Ford, Houdini, Eleanor Roosevelt, and Amelia Earhart, among others. Her award-winning Great Idea Series features biographies of inventors and their captivating inventions. She is also the author of the hilarious Merci Mister Dash! and Mister Dash and the Cupcake Calamity. Visit her website at www.monicakulling.ca. The author lives in Toronto, Ontario.

“To the Rescue! delineates how Garrett Morgan, a Kentucky-born son of slaves, developed a stronger sewing machine belt, a cream that prevented sewing machine needles from damaging cloth (and that also straightened hair), and a personal safety hood that would become the first gas mask used by firemen, underground workers, and World War I soldiers in the trenches .... Parkins uses his cartoonist skills in outlining these richly detailed illustrations, filled in with subdued gray and brown watercolors .... Wonderful nonfiction narratives that can be used to highlight diverse innovators whom history texts may have overlooked.” - School Library Journal


“Morgan’s simply told story is one of determination, perseverance and concern for others, his inventions inspired by real life events. Author Monica Kulling’s spare writing style is perfect for the intended audience, and, like other books in her “Great Idea Series”, this title focuses on the background behind the inventions. Parkins’ impressive mixed media illustrations not only capture the story’s historical setting, but also enhance the text with their attention to detail.” - CM Magazine