The Baker's Son: My Life in Business (Paperback) 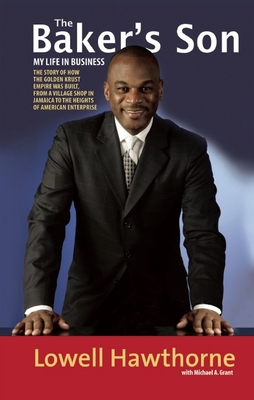 At 21, Hawthorne's parents shipped him off to New York, where his older siblings had already relocated. He eventually found a job, started college, and began to build the multi-million dollar business Golden Krust, whose Jamaican patties are a New York staple. Hawthorne's story is compelling on many levels: it offers a peek into life in Jamaica, a classic immigrant narrative, and a testament to the strength of family. Hawthorne's is a Horatio Alger tale with a Caribbean flavor, which should find an appreciative audience among entrepreneurs and business aficionados.
--Library Journal The American question gets a great, real-life look in The Baker's Son ... Hawthorne's story is at once inspirational and revelatory.
--Publishers Weekly In his memoir, The Baker's Son, Hawthorne shares how an idea inspired by his father's bakery in Border, Jamaica, grew into the 120-branch Golden Krust Caribbean Bakery and Grill. After 23 years of selling patties, pastries, sandwiches and more through Golden Krust, Hawthorne hasn't lost sight of his values.
--New York Daily News The Baker's Son is a deeply moving account that tells the story of an immigrant family from rural Jamaica that relocated to the Bronx in 1980s... the Hawthorne family has scaled the heights of success to achieve the American Dream to an unprecedented degree.
--The Philadelphia Tribune In gripping narrative that is both inspirational and instructive, Lowell Hawthorne shares how an idea infused with tenacity, intellect, and passion can become a dream realized. The Baker's Son offers a successful playbook for any entrepreneur who seeks to play on the rough-and-tumble field of business--and win."--Earl "Butch" Graves, Jr., President and CEO, Black Enterprise Lowell Hawthorne's chronicle of the development of a small Jamaican business into the highly successful Golden Krust Caribbean Bakery and Grill, an American business empire, is an invaluable guide to business success as well as an inspiring autobiographical work.--P.J. Patterson, former prime minister of Jamaica The Baker's Son is a memoir by the founder of Golden Krust Caribbean Bakery & Grill, the hugely successful Jamaican owned and run enterprise that reaches from New York to Florida with over 120 franchise locations. Starting from humble beginnings, and after weathering several major crises along the way, the Hawthorne family has scaled the heights of success to achieve the American Dream to an unprecedented degree. Today the Golden Krust brand represents the most lucrative Caribbean business ever established in America and one of the most profitable black businesses operating in the United States. Lowell Hawthorne is the president and CEO of Golden Krust Caribbean Bakery & Grill. He lives in Westchester, New York.

Lowell Hawthorne is the president and CEO of Golden Krust Caribbean Bakery & Grill, the nation's largest manufacturer, distributor, and franchiser of Caribbean baked products, which made history becoming the first Caribbean-owned business in the U.S to be granted a franchise license. Today the company encompasses over 120 stores across the United States. Hawthorne has been bestowed with many awards for his entrepreneurial prowess, including the prestigious Ernst & Young's Entrepreneur of the Year Award in 2002, and was conferred with the Order of Distinction from his native homeland of Jamaica. In 2011 he was named the Jamaica Observer's Diaspora Business Leader for 2010, and was conferred an honorary Doctor of Letters from Medgar Evers College in New York. In 2005, the Mavis & Ephraim Hawthorne Golden Krust Scholarship Foundation was launched, and since then has awarded over 150 scholarships to institutions. Currently a director of the Caribbean American Chamber of Commerce and Industry (CACCI) and chairman of the Partnership Board of the American Foundation for the University of the West Indies (AFUWI), he lives in Westchester, New York.