The Rise of Barack Obama (Paperback) 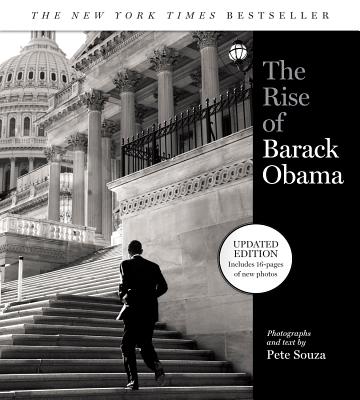 Award-winning photojournalist, Pete Souza, documents the meteoric rise of the charismatic Barack Obama from his first day in the U.S. Senate right up to the Pennsylvania presidential primary. More than 80% of these candid and stunning photographs capturing private and political moments have not been seen before. Souza provides extended commentary about each photo to place it in context, and describe the scene and participants. Photo-by-photo the viewer is allowed to examine the senator and candidate's path to the very cusp of history.

Pete Souza is a freelance photographer and assistant professor of photojournalism at Ohio University. He has worked as an official White House photographer for President Ronald Reagan and was also the official photographer for the President's June 2004 funeral. He is the author of two celebrated photographic books of President Reagan's term in office, Unguarded Moments: Behind-the-Scenes Photographs of President Reagan (1992) and Images of Greatness: An Intimate Look at the Presidency of Ronald Reagan by Triumph Books (2004). Souza's photographs have also appeared as photo spreads or covers in renowned magazines as National Geographic, Life, Fortune, Newsweek, and U.S. News & World Report and have also been part of group exhibits at the National Archives, Smithsonian Museum of American History, and Corcoran Gallery of Art.