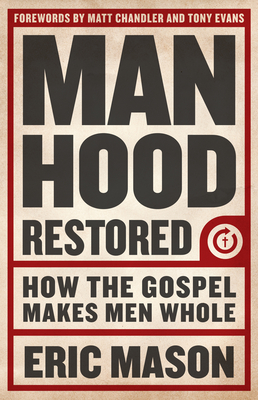 The earthly crisis within manhood will be there until Jesus returns, but in Christ men are pointed toward the gospel as the vision for renewal. Manhood Restored by exciting new pastoral voice Eric Mason combines theological depth with practical insights, putting men in step with a gospel-centered manhood that will enrich every facet of their lives.

Mason begins with The Scope of Manhood -- looking first at why God created man, at the divine differences between man and woman, and what should drive the purpose of a man during his time on earth.

A section on The Problems in Manhood analyzes the false icons that lead to cultural caricatures of men -- the businessman, the thug, the playboy, the athlete, etc. Mason then makes a connection to the cross-cultural fatherhood crisis, looking at the things men do to fill the void when their relationship with dad or God is not there.

Finally, The Redemption of Manhood sets Jesus as the true standard of biblical manhood, looking to his perfect example to redeem and restore a man's life in the areas of sexuality, home, and work.


Matt Chandler serves as Lead Pastor of Teaching at The Village Church in the Dallas/Fort Worth metroplex. He came to The Village in December 2002 and describes his tenure as a replanting effort where he was involved in changing the theological and philosophical culture of the congregation. The church has witnessed a tremendous response growing from 160 people to over 11,000 with campuses in Flower Mound, Dallas, Denton and Fort Worth.Matt is currently involved in church planting efforts both locally and internationally through The Village and various strategic partnerships. He serves as president of Acts 29, a worldwide church-planting organization. Over the last 10 years, Acts 29 has emerged from a small band of brothers to nearly 500 churches in the United States and around the world.Beyond speaking at conferences throughout the world, Matt has also written two books, The Explicit Gospel, published in April 2012, and Creature of the Word, released in October 2012. His greatest joy outside of Jesus is being married to Lauren and being a dad to their three children, Audrey, Reid and Norah.