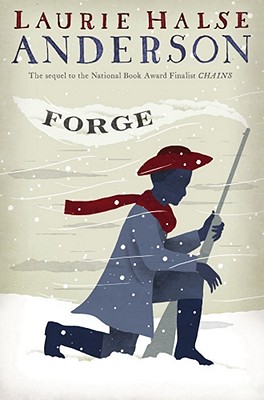 “Shortly after Isabel robs and leaves him, an angry and impulsive Curzon re-enters the army and is stationed at Valley Forge to wait out the winter. Through a traumatic series of events Curzon and Isabel are reunited; he's secretly happy, she's not-so-secretly bitter. As they battle the winter and their feelings toward each other they realize they still have a common goal, freedom. Yet another wonderful work of historical fiction, we know why you're a National Book Award Finalist Laurie!”
— Sarah Hill, The River's End Bookstore, Oswego, NY

“One of the best novels they have ever read.” —Kirkus Reviews

Curzon navigates the dangers of being a runaway slave in this keenly felt second novel in in the historical middle grade The Seeds of America trilogy from acclaimed author Laurie Halse Anderson.

Blistering winds. Bitter cold. And the hope of a new future.

The Patriot Army was shaped and strengthened by the desperate circumstances of the Valley Forge winter. This is where Curzon the boy becomes Curzon the young man. In addition to the hardships of soldiering, he lives with the fear of discovery, for he is an escaped slave passing for free.

And then there is Isabel, who is also at Valley Forge—against her will. She and Curzon have to sort out the tangled threads of their friendship while figuring out what stands between the two of them and true freedom.

Laurie Halse Anderson is a New York Times bestselling author known for tackling tough subjects with humor and sensitivity. Her work has earned numerous ALA and state awards. Two of her books, Chains and Speak, were National Book Award finalists. Chains also received the 2009 Scott O’Dell Award for Historical Fiction, and Laurie was chosen for the 2009 Margaret A. Edwards Award. Mother of four and wife of one, Laurie lives in Pennsylvania, where she likes to watch the snow fall as she writes. You can follow her adventures on Twitter @HalseAnderson, or visit her at MadWomanintheForest.com.

At the end of Chains (2008), Isabel rescues her friend Curzon from Bridewell Prison and rows away from Manhattan in their escape from slavery. Now, in the second of the planned trilogy, Isabel goes her own way, and 15-year-old Curzon takes over as narrator. Passing as free, he joins the Continental Army at Valley Forge during the winter of 1777-78, where, against the most desperate of circumstances, he forges a friendship with fellow soldiers. When he is enslaved again and meets up with Isabel, he and she must once again take liberty into their own hands and find a way to escape. Weaving a huge amount of historical detail seamlessly into the story, Anderson creates a vivid setting, believable characters both good and despicable and a clear portrayal of the moral ambiguity of the Revolutionary age. Not only can this sequel stand alone, for many readers it will be one of the best novels they have ever read. A good match with Russell Freedman’s Washington at Valley Forge (2008). - KIRKUS, September 1, 2010, *STAR

Anderson follows her searing, multi-award-winning novel Chains (2008) with this well-researched sequel, also set during the Revolutionary War and narrated by a young African American. This time, though, her central character is male, and the heartbreaking drama shifts from Chains’ domestic town houses to graphically described bloody battlefields. After a narrowly successful escape from Manhattan, former slaves Isabel and Curzon separate, and Curzon is once again on the run. He finds necessary food and shelter as a private with the Continental army, and through Curzon’s eyes, Anderson re-creates pivotal historical scenes, including the desperate conditions at Valley Forge. Curzon isn’t as fully realized here as Isabel was in Chains, resulting in a less-cohesive and -compelling whole. Once again, though, Anderson’s detailed story creates a cinematic sense of history while raising crucial questions about racism, the ethics of war, and the hypocrisies that underlie our country’s founding definitions of freedom. Chapter heads excerpted from historical documents and a long appendix that offers research suggestions and separates fact and fiction add further curricular appeal.


Second in the Seeds of America trilogy, this sequel to the National Book Award finalist Chains is narrated by Curzon, the slave Isabel freed from prison while escaping her own enslavement in 1777 New York City. Curzon immediately explains how he and Isabel lived in New Jersey for a few months, before she ran away with their meager funds in hopes of finding her sister, a quest Curzon refused to support. Months later, Curzon is doing his best to forget Isabel, though the depth of his feelings is made evident in flashbacks of their time together. After Curzon saves the life of Eben, a young rebel soldier, he joins the army and suffers through the winter at Valley Forge; tension mounts when Curzon's former owner arrives. Anderson includes meticulous details about the lives of soldiers and, with just a few words, brings readers deep inside Curzon's experience ("My belly voted louder than my wits"). Her masterful storytelling weaves themes of friendship, politics, love, and liberty into a deeply satisfying tale that will leave readers hungry for the final volume. - PW, September 13, 2010, *STAR

Gr 6-10–This sequel to Chains (S & S, 2008) opens with Curzon, an enslaved teen who was freed from prison by Isabel, recalling his escape and anticipating the future. After an argument with Isabel about where they should go next, the 15-year-old battles the British at Saratoga and winters in Valley Forge with the Patriots. He reveals many details of the conditions endured by the soldiers during the winter of 1777-1778, including the limited food supply, lack of adequate shelter, and tattered clothing. When Curzon and Isabel meet again, they have both been captured and must devise a plan of escape once again. While the Patriots are fighting for the freedom of a country, these young people must fight for their personal freedom. This sequel can be read alone but readers will benefit from reading the first book, which develops the characters and reveals events leading up to the winter at Valley Forge. An appendix clarifies historical facts and real-life characters. A list of colloquial terms used throughout the novel is appended.–Denise Moore, O’Gorman Junior High School, Sioux Falls, SD

Chains (rev. 11/08) ended with slave girl Isabel escaping from 1776 New York with fellow slave Curzon, who takes over the narration in this sequel. Only fifteen, he enlists in the Continental Army in late 1777. His experiences as a young runaway slave during the American Revolution differ greatly from Isabel's; though he lives in fear of discovery, he befriends a white soldier boy named Eben and even gains a sense of patriotism and camaraderie serving alongside other soldiers encamped for the winter at Valley Forge. Unfortunate circumstances bring Curzon and Isabel back together, and it is the struggle to mend their friendship and continue their quest for freedom that drives the latter half of the novel. Anderson seamlessly weaves her fictitious characters into history in a cohesive, well-researched narrative about the Revolutionary War that still focuses foremost on developing characters and their interpersonal relationships. Relevant historical quotes at the beginning of each chapter add authenticity, as does Curzon's firsthand account of daily life at Valley Forge; his detailed narration of privations, inequalities, and hard work compellingly conveys the plight of the common soldier. As one man in Curzon's regiment explains, Valley Forge "is a forge for the army; it's testing our qualities. Instead of heat and hammer, our trials are cold and hunger. Question is, what are we made of?" With this riveting sequel, Anderson certainly passes the test. Cynthia K. Ritter
--The Horn Book, Nov/Dec 2010 Issue, *STAR

Curzon and Isabel, runaway slaves in Anderson’s Chains (BCCB 11/08), have parted company—she is headed south to find her sister Ruth, and he finds work driving a cart for Patriot soldiers. An impulsive act of battlefield bravery leads to Curzon’s enlistment as a freeman with the 16th Massachusetts Regiment, and he’s now a tentmate with Eban Woodruff, the young man whose life he saved, and John Burns, a sly bigot who waits for an opportunity to drum Curzon out of the army. Personal animosity simmers as the soldiers encamp at Valley Forge for the winter of 1777-8, but Curzon and his comrades cooperate to make the best of dire circumstances. When Burns rises to the rank of sergeant, though, and Curzon’s legal owner, James Bellingham, reclaims his service, Curzon begins to plot yet another escape. His situation is immediately complicated by the appearance of Isabel, who has been recaptured and sold to Bellingham. Bellingham knows Curzon will withhold his labor, so he threatens to punish Isabel, who already wears a locked metal cuff around her neck, for each infraction he may cause. Desperate but unable to plan a foolproof escape, Curzon and Isabel are blessed by chance and the unexpected aid of Curzon’s old comrades at arms with some slim hope of freedom as the novel ends and they march out of Valley Forge, protectively surrounded by decamping troops. The saga that began as Isabel’s tale loses none of its tension as it switches to Curzon’s plight, and the pair’s situation at the novel’s conclusion is precarious enough to suggest—even demand—another volume. Again Anderson crafts her source notes into a reader-friendly Q&A discussion and appends a glossary of eighteenth-century terms. As one of Curzon’s mates observes, “This camp is a forge for the army; it’s testing our qualities. . . . Question is, what are we made of?” For Curzon and Isabel, it’s sorrow, grit, and a passion for freedom. EB
--Bulletin of the Center for Children's Books, November 2010

Forge is the sequel to Chains (2008), but it can be read independently. Anderson has done her research and accurately portrays the horrors of serving in the first Continental Army at Valley Forge. The story within is of slavery in a fledgling nation; the freedom that the founding fathers were fighting for did not extend to their slaves. The hero of the story, Curzon, has already served in the army, but in trying to get away from a cruel master, he is re-enlisted. When his former master reappears, his friends from his squad help him escape, along with Isabel, the heroine of Chains. The book contains an appendix with glossary, further readings, and Q&A about the historical background and primary sources used. Each chapter begins with a quote pertaining to the war or slavery. While the details are accurate, the book is not gratuitously violent. Curzon is an empathetic character to whom most young people will relate. At the end, when Curzon and Isabel escape, the reader can only hope that all will end well in the next book. Laurie Halse Anderson has again written historical fiction at its finest.