Martin's Dream: My Journey and the Legacy of Martin Luther King Jr. (Paperback) 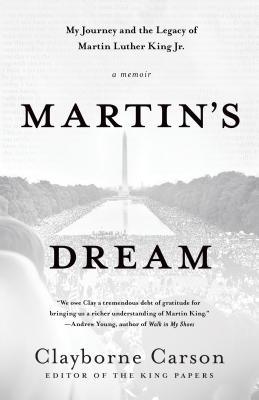 By Clayborne Carson
Email or call for price
Out of Print

On August 28, 1963, hundreds of thousands of demonstrators flocked to the nation's capital for the March on Washington. That day Clayborne Carson, a 19-year-old black student from a working-class family in New Mexico who had hitched a ride to Washington, heard Dr. Martin Luther King, Jr. deliver his famous "I Have a Dream" speech. It was a life-changing occasion for the author as it launched him on a career to become one of the most important chroniclers of the civil rights era. Two decades later, as a distinguished professor of African American History at Stanford University, Mrs. King picked Dr. Carson to edit her late husband's papers. Taking the reader on a journey of rediscovery of the King legend, he draws on new archives as well as unpublished letters. Dr. Carson examines his decades long quest to understand Martin Luther King, Jr. the man, delve into the construction of his legacy, and to understand how King's "dream" has evolved.

Clayborne Carson is professor of History at Stanford University and director of the Martin Luther King, Jr., Research and Education Institute, and also helped to design the King National Memorial. He is the author of Martin's Dream. Selected in 1985 by the late Mrs. Coretta Scott King to edit and publish Dr. King's papers, Carson has devoted most of his professional life to the study of MLK. He has spoken about Dr. King and his legacy throughout the world, and has appeared on many national radio and television shows, including Good Morning America, NBC Nightly News, CBS Evening News, The NewsHour, Fresh Air, Morning Edition, Tavis Smiley, Charlie Rose, Democracy Now, and Marketplace. Carson has also served as a historical advisory for numerous documentaries, including “Freedom on My Mind,” which was nominated for an Oscar in 1995.

“Drawing from his personal journals and records, Carson offers a personal and candid account of his evolution from political activist into a self-described ‘activist scholar' in his new book Martin's Dream.” —Black Christian News

“[Carson] details his work on the vast number of King documents he and his colleagues have assembled, his complex interactions with the King family and others, and his evolving view of Dr. King -- from an African American civil rights leader to a farsighted visionary and revolutionary advocate for global peace, economic fairness and social justice. He also calls attention to the significant discoveries of the King Papers project that have received little public attention.” —History News Network

“The founding director of the Martin Luther King, Jr. Research and Education Institute reviews his own life, tells how he became involved with the publication of King's papers, and charts the complicated choreography of his relationship with the King family. . .Compelling aspects of memoir and cultural history.” —Kirkus Reviews

“A remarkably candid memoir. . . No matter how much you may think you know about the Civil Rights Movement, you will learn from Carson's journey and will likely be surprised by the many challenges he faced as he struggled to define and to preserve Dr. King's many contributions for posterity.” —Michelle Alexander, author of the bestselling The New Jim Crow

“Clayborne Carson's compelling memoir is full of meaningful insights. This book is a must-read!” —Clarence Jones, author of Behind the Dream

“Clay Carson's compelling personal story confirms Coretta King's wisdom in entrusting the Martin Luther King papers to his care. We owe Clay a tremendous debt of gratitude for bringing us a richer understanding of Martin King and the philosophy of creative non-violence to which he gave his life. We are still on a journey to Martin's ‘Beloved Community' and we are fortunate Clay Carson has shared his own journey with us.” —Andrew Young, author of Walk In My Shoes