How to Succeed in Business Without Being White: Straight Talk on Making It in America (Paperback) 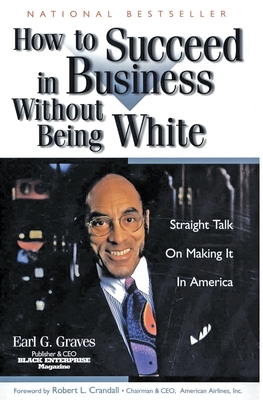 African-Americans are entering the business world in unprecedented numbers, and Earl G. Graves serves as their role model and mentor. Graves, one of the most influential and well-known executives in the world, in this timely andimportant book shows how he, the son of a West Indian garment worker, became a multimillionaire entrepreneur, director of several of America's Fortune 500 corporations and a philanthropist.

Using his own story (which includes careers in the military, real estate and public service as an assistant to Senator Robert F. Kennedy), and those of dozens of other black men and women who have made it in the business world as examples, Graves offers inspirational and down-to-earth advice to help readers take advantage of opportunities to achieve personal and professional success. From overcoming the challenges blacks confront in getting financing for new ventures to identifying the best dustries and jobs for black job-seekers and cultivating the behaviors needed to make it as an entrepreneur, How to Succeed in Business Without Being White clearly lights the path readers can take to overcome adversity and succeed intoday's largely white business environment.

EARL G. GRAVES is president and CEO of Earl G. Graves, Ltd., and publisher of Black Enterprise magazine, an award-winning monthly publication for African Americans in business. He is chairman and CEO of Pepsi-Cola of Washington, D.C., L.P., the largest minority-controlled Pepsi-Cola franchise in the United States. Graves is a nationally recognized authority on black business development and serves on the boards of the Black Business Council, Howard University, the Boy Scouts of America, and the Glass Ceiling Commission. He is a director of Aetna Inc.; AMR Corporation (American Airlines); Chrysler Corporation; Federated Department Stores, Inc.; and Rohm & Haas Corporation. Graves is the recipient of 37 honorary degrees.

Graves lives in Westchester County, New York, with his wife of 37 years, Barbara. They have three married sons and a growing brood of grandchildren.