Keep Your Airspeed Up: The Story of a Tuskegee Airman (Hardcover) 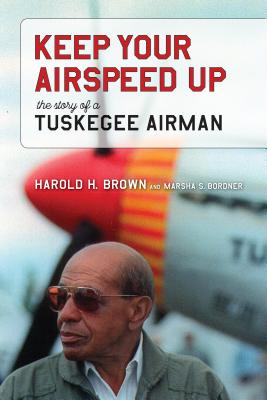 Inspiring memoir of Colonel Harold H. Brown, one of the 930 original Tuskegee pilots, whose dramatic wartime exploits and postwar professional successes contribute to this extraordinary account.

Keep Your Airspeed Up: The Story of a Tuskegee Airman is the memoir of an African American man who, through dedication to his goals and vision, overcame the despair of racial segregation to great heights, not only as a military aviator, but also as an educator and as an American citizen.

Unlike other historical and autobiographical portrayals of Tuskegee airmen, Harold H. Brown’s memoir is told from its beginnings: not on the first day of combat, not on the first day of training, but at the very moment Brown realized he was meant to be a pilot. He revisits his childhood in Minneapolis where his fascination with planes pushed him to save up enough of his own money to take flying lessons. Brown also details his first trip to the South, where he was met with a level of segregation he had never before experienced and had never imagined possible.

During the 1930s and 1940s, longstanding policies of racial discrimination were called into question as it became clear that America would likely be drawn into World War II. The military reluctantly allowed for the development of a flight-training program for a limited number of African Americans on a segregated base in Tuskegee, Alabama. The Tuskegee Airmen, as well as other African Americans in the armed forces, had the unique experience of fighting two wars at once: one against Hitler’s fascist regime overseas and one against racial segregation at home.

Colonel Brown fought as a combat pilot with the 332nd Fighter Group during World War II, and was captured and imprisoned in Stalag VII A in Moosburg, Germany, where he was liberated by General George S. Patton on April 29, 1945. Upon returning home, Brown noted with acute disappointment that race relations in the United States hadn’t changed. It wasn’t until 1948 that the military desegregated, which many scholars argue would not have been possible without the exemplary performance of the Tuskegee Airmen.

Harold H. Brown grew up in Minneapolis, Minnesota. After completing flight training at the Tuskegee Institute, he served as a combat pilot with the 332nd Fighter Group during World War II. After the war, he joined the Strategic Air Command before earning his PhD and serving as an administrator at what is now Columbus State Community College in Columbus, Ohio

Marsha S. Bordner is president emeritus at Terra State Community College in Fremont, Ohio. She has spent more than thirty-five years committed to higher education, both as an educator and as an administrator. She earned her PhD in English from the Ohio State University.

"Keep Your Airspeed Up is a surprise. A very nice one. Not only is it a warm and genuine biography, beginning even before author Harold H. Brown was born, but this book takes readers through a two-pronged fight, both in war and for civil rights, as told through quiet tales of heroes and those who created them . . .Even if you don't consider yourself a World War II buff, this book is more than just that; there's other history here, as well as a biography that will charm you plenty. If that seems like a winner for you, then Keep Your Airspeed Up is a pretty big book."
—Marco Eagle

“Brown describes in compelling, firsthand detail what it was like to be a Tuskegee Airman, why at least one young African American man wanted to participate in the historical experience in the first place, and what difference it made in the arc of his life. Brown’s personality is evident on the page and his voice is absorbing.”
—J. Todd Moye, author of Freedom Flyers: The Tuskegee Airmen of World War II