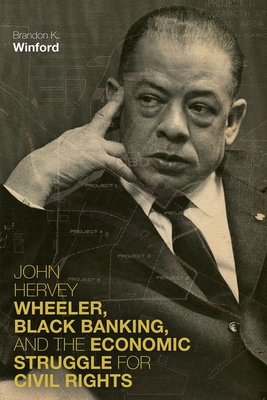 John Hervey Wheeler (1908--1978) was one of the civil rights movement's most influential leaders. In articulating a bold vision of regional prosperity grounded in full citizenship and economic power for African Americans, this banker, lawyer, and visionary would play a key role in the fight for racial and economic equality throughout North Carolina.

Utilizing previously unexamined sources from the John Hervey Wheeler Collection at the Atlanta University Center Robert W. Woodruff Library, this biography explores the black freedom struggle through the life of North Carolina's most influential black power broker. After graduating from Morehouse College, Wheeler returned to Durham and began a decades-long career at Mechanics and Farmers (M&F) Bank. He started as a teller and rose to become bank president in 1952. In 1961, President Kennedy appointed Wheeler to the President's Committee on Equal Employment Opportunity, a position in which he championed equal rights for African Americans and worked with Vice President Johnson to draft civil rights legislation. One of the first blacks to attain a high position in the state's Democratic Party, Wheeler became the state party's treasurer in 1968, and then its financial director.

Wheeler urged North Carolina's white financial advisors to steer the region toward the end of Jim Crow segregation for economic reasons. Straddling the line between confrontation and negotiation, Wheeler pushed for increased economic opportunity for African Americans while reminding the white South that its future was linked to the plight of black southerners.

Brandon K. Winford is assistant professor of history at the University of Tennessee. He is a historian of the late-nineteenth and twentieth-century United States and African American history with areas of specialization in civil rights and black business history.