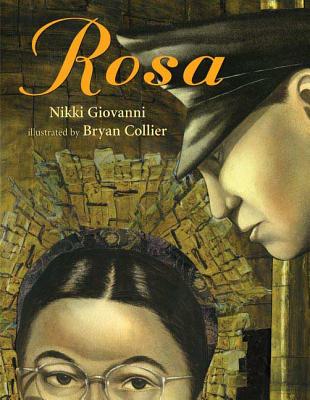 She had not sought this moment but she was ready for it. When the policeman bent down to ask "Auntie, are you going to move?" all the strength of all the people through all those many years joined in her. She said, "No."

An inspiring account of an event that shaped American history

Fifty years after her refusal to give up her seat on a Montgomery, Alabama, city bus, Mrs. Rosa Parks is still one of the most important figures in the American civil rights movement. This picture- book tribute to Mrs. Parks is a celebration of her courageous action and the events that followed.

Rosa is a 2006 Caldecott Honor Book and the winner of the 2006 Coretta Scott King Illustrator Award.

Nikki Giovanni has written many books of poetry for children and adults. She is the author of Rosa, a Caldecott Honor book, Lincoln and Douglass, The Genie in the Jar, and Ego-tripping and Other Poems for Young People. Giovanni calls herself, "a Black American, a daughter, a mother, a professor of English."  She was born in Knoxville, Tennessee, and grew up in Lincoln Heights, an all-black suburb of Cincinnati, Ohio. She studied at Fisk University, the University of Pennsylvania, and Columbia University. She published her first book of poetry, Black Feeling Black Talk, in 1968, and since then has become one of America’s most widely read poets. Oprah Winfrey named her as one of her twenty-five “Living Legends.” Her autobiography Gemini was a finalist for the National Book Award, and several of her books have received NAACP Image Awards. She has received some twenty-five honorary degrees, been named Woman of the Year by Mademoiselle Magazine, The Ladies Home Journal and Ebony, was the first recipient of the Rosa L. Parks Woman of Courage Award, and has been awarded the Langston Hughes Medal for poetry. Nikki Giovanni lives in Christiansburg, Virginia, where she is a professor of English at Virginia Polytechnic Institute.

Bryan Collier is the author and illustrator of Uptown, winner of the Coretta Scott King Award and the Ezra Jack Keats Book Award. He is also the illustrator of Martin’s Big Words by Doreen Rappaport and Rosa by Nikki Giovanni, both of which are Caldecott Honor Books. The Chicago Sun-Times has called Collier’s art “breathtakingly beautiful.” Mr. Collier lives with his family in Harlem in New York City.

“Purposeful in its telling, this is a handsome and thought-provoking introduction to these watershed acts of civil disobedience.” —School Library Journal

“Giovanni and Collier offer a moving interpretation of Rosa Park's momentous refusal to give up her bus seat. The author brings her heroine very much to life...a fresh take on a remarkable historic event.” —Publishers Weekly

“An essential volume for classrooms and libraries.” —Kirkus Reviews