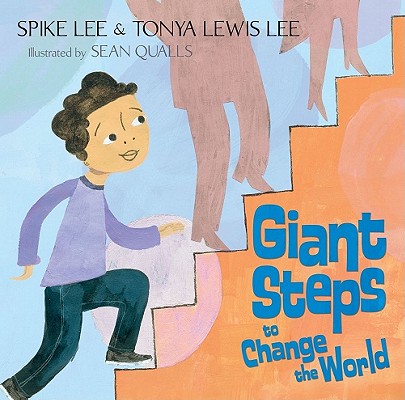 "On some days your dreams may seem too away far to realize… Listen to the whispers of those that came before..."

Following the success of their much beloved picture books, Please, Baby, Please and Please, Puppy, Please; Academy Award nominated director Spike Lee, and his talented wife Tonya Lewis Lee offer up an inspirational picture book about activism and taking the big steps to set things right set to beautiful illustrations by the award-winning Sean Qualls. Using examples of people throughout history who have taken "giant steps", this book urges kids to follow in their footsteps and not be hindered by fear or a sense that you are not good enough. Despite the challenges, even the smallest step can change the world. So, what's your next step going to be?

Spike Lee is one of the most prominent and influential media figures today. His films include the critically acclaimed School Daze; Academy Award nominee Do the Right Thing; Malcolm X; Clockers; and 25th Hour. Born in Atlanta, Spike attended Morehouse College and NYU's Tisch School of the Arts, where he earned his master of fine arts degree in film production. Spike and his wife are the authors of Please, Baby, Please, their first picture book with Simon & Schuster. They live in New York City with their two children.

Tonya Lewis Lee is a graduate of Sarah Lawrence College and the University of Virginia School of Law. As a children's television producer she has worked with Disney, Nickelodeon, and Noggin/The N, where she was the executive producer of the award-winning documentary I Sit Where I Want: The Legacy of Brown v. Board of Education and the critically acclaimed miniseries Miracle's Boys. She is also the author of Gotham Diaries, her first novel.

Sean Qualls has created art for magazines, newspapers, advertisements and children's books. His work is a mixed media combination of painting, drawing, and collage. Sean is the illustrator of Before John was a Jazz Giant, which received the Coretta Scott King Honor award; The Baby on the Way (FSG), a New York Times Notable Book, Powerful Words (Scholastic); Poet Slave of Cuba (HENRY HOLT), a BCCB Blue Ribbon Book; How We Are Smart (Lee & Low) and Dizzy (Scholastic) an ALA Notable, Kirkus Best Book, BCCB Blue Ribbon Book, School Library Journal Best Book of the Year, Booklist Editors' Choice, Horn Book Magazine Fanfare Book, and a Child Magazine Best Book. His first book with Simon and Schuster is Little Cloud and Lady Wind (Spring 2010) by Toni and Slade Morrison. He lives with his wife and son in Brooklyn, New York.