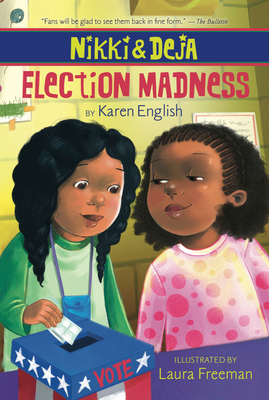 When the students in Nikki and Deja’s class find out that their school is going to hold its first-ever election for student body president, some kids are more excited than others. But none is as excited as Deja, who figures she’s a shoo-in for the third grade nomination. Deja decides that Nikki will be her campaign manager, of course, and puts her to work right away. But will Deja’s tendency to rush into things and boss people around alienate her best friend when she needs her most, and spoil her chances of becoming president of Carver Elementary?

This is a charming new entry in a chapter book series praised for its humor and authentic characters.

Karen English is a Coretta Scott King Honor Award-winner and the author of It All Comes Down to This, a Kirkus Prize Finalist, as well as the Nikki and Deja and The Carver Chronicles series. Her novels have been praised for their accessible writing, authentic characters, and satisfying storylines. She is a former elementary school teacher and lives in Los Angeles, California.

Laura Freeman has illustrated several books for young readers, including the Nikki and Deja and Carver Chronicles series, and Natalie's Hair Was Wild, which she also wrote. Laura grew up in New York City, and now lives in Atlanta, Georgia, with her husband and two children. www.lfreemanart.com Instagram: @laurafreemanart Twitter: @LauraFreemanArt.

"New readers can happily meet the girls for the first time here and then go back to fill in the picture, while fans will be glad to see them back in fine form."
—Bulletin