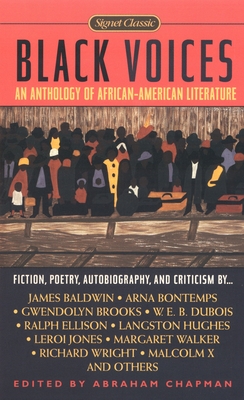 Featuring fiction, poetry, autobiography, and literary criticism, Black Voices captures the diverse and powerful words of a literary explosion, the ramifications of which can be seen and heard in the works of today’s African-American artists. A comprehensive and impressive primer, this anthology presents some of the greatest and most enduring work born out of the African-American experience in the United States.

Abraham Chapman was professor of English and Chairman of the American Literature survey courses at Wisconsin State University–Stevens Point. His writings include critical studies on American literature of the nineteenth and twentieth centuries and book reviews for various leading periodicals. He was the author of The Negro in American Literature. In 1968, Professor Chapman received the Biennial College Language Association Creative Scholarship Award for his study The Harlem Renaissance in Literary History, published in CLA Journal.