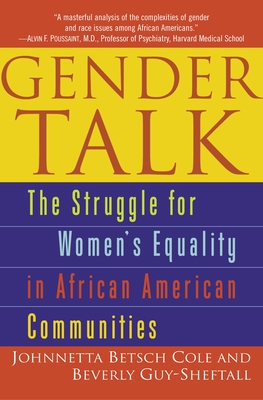 “A groundbreaking look at the controversial topic of sexism and gender politics within African American communities.”—Ebony

In the Black community, rape, violence against women, and sexual harassment are as much the legacy of slavery as is racism. In Gender Talk, Johnnetta Betsch Cole and Beverly Guy-Sheftall argue powerfully that the only way to defeat this legacy is to focus on the intersection of race and gender.

Examining why the “race problem” has become so male-centered and how this has opened a deep divide between Black women and men, the authors turn to their own lives, offering intimate accounts of their experiences as daughters, wives, and leaders. They examine pivotal moments in African American history when race and gender issues collided with explosive results. Along the way, they present the testimonies of a large and influential group of Black women and men, including Byllye Avery, Derrick A. Bell, Farai Chideya, Kimberlé Crenshaw, Michael Eric Dyson, Marcia Gillespie, bell hooks, and Faye Wattleton.

Fearless and eye-opening, Gender Talk is required reading for anyone concerned with the future of African American women—and men.

Johnnetta Betsch Cole is the President of Bennett College in Greensboro, North Carolina. She is President emerita of Spelman College and Professor emerita of anthropology, Women’s Studies, and African American Studies at Emory University. A nationally known African American feminist-intellectual, she is the author of several books, including Conversations: Straight Talk with America’s Sister President.

Beverly Guy-Sheftall is the Anna Julia Cooper Professor of Women’s Studies and English, and the Director of the Women’s Research and Resource Center at Spelman College. She is the editor of Words of Fire: An Anthology of African American Feminist Thought and coeditor (With Rudolph Byrd) of Traps: African American Men on Gender and Sexuality among many other publications. She lives in Atlanta.

“Captivating, bold, and well researched . . . A book of such breadth and insight . . . The strength of Gender Talk lies not only in its rich content and in its persuasive claims about the role of gender and sexuality in the struggle against racism, but also in the ease with which it wears its learning.”—The Crisis Forum

“A masterful analysis of the complexities of gender and race issues among African Americans.”—Alvin F. Poussaint, M.D., Professor of Psychiatry, Harvard Medical School

“Gender Talk challenges the zero/sum game of patriarchy—that women must lose so men can win—with the simple truth that the Black community only wins when all its members are strong. Personally honest, well-researched, practical and brave, Johnnetta Cole and Beverly Guy-Sheftall have given all Americans a healing book that no family, classroom, library, or couple should be without.”—Gloria Steinem

“Back in the day, Black people agreed not to talk about women’s liberation. . . . Cole and Guy-Sheftall have done us all a service in calling us to finish the work of women’s equity in our community. This book should be read by everyone interested in the welfare of women and of Black people.”—Mindy Fullilove, Professor of Clinical Psychiatry and Public Health, Columbia University

“Truth telling, wisdom sharing, strong women have been and are the ‘tie that binds the Black Community.’ This book by two sisters in that long line is filled with truth and wisdom.”—The Rev. Canon Frederick B. Williams, Rector, Church of the Intercession

“Every feminist—and everyone who cares about racial and gender justice— should read Gender Talk to understand the deep connections between these historic liberation movements. . . . This book is an original contribution to the political dialogue about race and sex.”—Estelle Freedman, Department of History, Stanford University, author of No Turning Back

“Thoughtful, provocative, concerned, and urgent, this work ignites a much-needed debate over the state of true Black community and the role of women within that community. . . . Historically centered and respectful.”—Publishers Weekly

“Gender Talk reaches not for what is safe and easy, but for the most difficult issues that will confront Black women and men in the years ahead if they are to survive as a group. . . . Written from the heads and the hearts of two women with long careers in race and gender struggles inside and across the color line, its brilliant but blunt honesty speaks truth through the power of Black womanhood.”—Nellie Y. McKay, Department of African American Studies, University of Wisconsin, Madison

“Recommended . . . A down-to-earth, unabashedly revolutionary corrective to the conservative slant of much that is published regarding African American communities.”—Library Journal

“This is an impassioned, insightful look at a controversial topic.”—Booklist