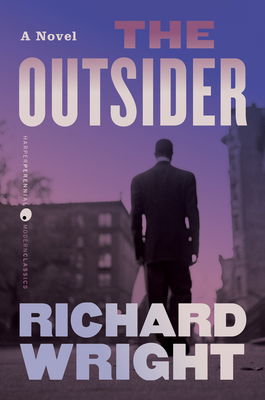 From Richard Wright, one of the most powerful, acclaimed, and essential American authors of the twentieth century, comes a compelling story of one man's attempt to escape his past and start anew in Harlem.

Cross Damon is a man at odds with society and with himself—a man of superior intellect who hungers for peace but who brings terror and destruction wherever he goes. The Outsider is an important work of fiction that depicts American racism and its devastating consequences in raw and unflinching terms. Brilliantly imagined and frighteningly prescient, it is an epic exploration of the tragic roots of criminal behavior.

Richard Wright won international renown for his powerful and visceral depiction of the black experience. He stands today alongside such African-American luminaries as Zora Neale Hurston, James Baldwin, and Toni Morrison, and two of his novels, Native Son and Black Boy, are required reading in high schools and colleges across the nation. He died in 1960.

“The Outsider is a prophetic book . . . a book people should ponder.”
— Arnold Rampersad, New York Times

“Wright created in this fast-paced, riveting narrative...one of the most complex characters in African-American fiction: a black intellectual, freed of his past, who plays out the Sartrean belief that ‘Existence precedes essence.’ ”
— Charles Johnson, Tribune Books

“It is in the description of action, especially violent action, that Mr. Wright excels, not merely because he can make the reader see but because he compels him to participate.”
— Granville Hicks, New York Times